Canada agreed to “forever release” Catholic entities from their pledge to raise $25 million for residential school survivors and also picked up their legal bill, a final release document shows.

The Canadian press obtained a signed copy of the 2015 agreement through federal access to information laws, marking what appears to be the first time the document has been widely released.

“This is a very, very important set of records,” said Ry Moran, associate librarian at the University of Victoria and founding director of the National Center for Truth and Reconciliation.

“Like all questions around accountability, the question is, ‘Who made the decision?’ How was this decision made? Who finally signed this off?”

Indigenous leaders and legal experts have long questioned why Ottawa chose to drop an appeal of a court ruling that meant Catholic entities did not have to pay their remaining financial obligations under the historic Indian Residential Schools Settlement Agreement.

The actions of the Catholic groups involved—and by extension the Catholic Church as an institution—as well as Ottawa have come under renewed scrutiny since the discovery of what are believed to be hundreds of unmarked graves in the former residential schools, which First Nations began announcing last year.

The 2015 decision dismissed the appeal

The dispute in question arose years earlier and culminated in a court decision handed down by a Saskatchewan judge in July 2015.

There was a disagreement between Ottawa and the Catholic entities about part of their obligations.

LOOK | How the Pope’s visit to Canada unfolded in 11 minutes:

How the Pope’s visit to Canada unfolded in 11 minutes

Pope Francis recently completed a six-day “pilgrimage of penance” in Alberta, Quebec and Nunavut. First Nations, Métis and Inuit communities reflected on his apology and visit with hope, disappointment and calls for action.

At issue was whether lawyers for both sides had reached an agreement to release the church groups from all their financial obligations, including $25 million to survivors, in exchange for a payment of 1, 2 million dollars, or they only had an agreement that covers a narrower part of their financial responsibilities.

Ultimately, Judge Neil Gabrielson ruled that the settlement covered all of the church’s financial commitments, allowing the Catholic entities to abandon their fundraising pledge to survivors after raising less than $4 million.

Records obtained by The Canadian Press show that a month after that July 2015 decision, federal officials filed a “protective notice of appeal” while negotiating a final release agreement with the Catholic groups.

On October 30, 2015, the former deputy minister signed a final agreement at what had been called Aboriginal and Northern Affairs Canada, releasing Catholic entities from their financial obligations.

“Canada forever releases, releases and discharges Catholic entities, their directors, officers, shareholders, agents, attorneys and employees, from and against all actions, causes of action, suits, debts, dues, accounts, bonds of any kind. against those released,” he says.

It continues: “Canada undertakes and does not agree directly or indirectly to join, assist, assist or act in any way in concert with any person or entity to make any financial claim or suit against the Releasees.”

The language raises questions about the possibility of review

The signed agreement was released as part of more than 200 pages of briefing documents and court records prepared for Crown-Indigenous Relations Minister Marc Miller last fall after he pledged to find out what happened that led to Canada to drop its appeal. Many of the government records were redacted in part or in whole.

Miller, at least in one media interview, has expressed openness to the idea of ​​revisiting the government’s 2015 decision.

However, Canada’s agreement to “free forever” Catholic entities and the broad language of the signed document raise questions about whether that can happen. 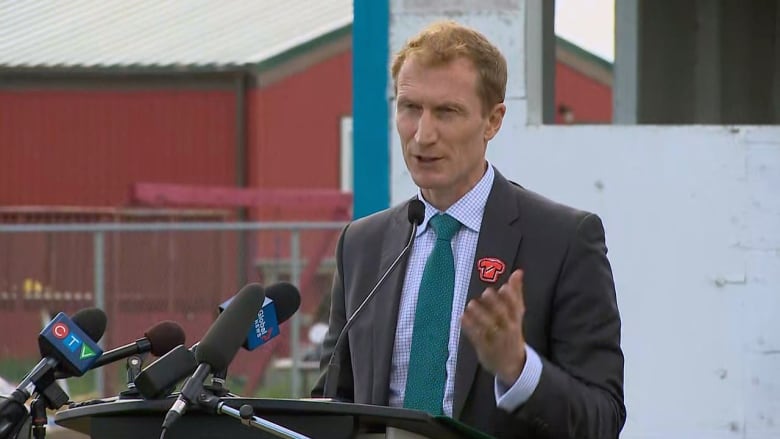 Crown-Indigenous Relations Minister Marc Miller is pictured earlier this month during an apology to the Peepeekisis Cree Nation on behalf of the Canadian government. The settlement signed in 2015 was released as part of more than 200 pages of briefing documents and court records prepared for Miller last fall. (Gary Solilak/CBC)

“The minister committed to understanding the circumstances and events that led the government of the day to withdraw the appeal,” Miller’s office said in a statement on Friday.

“Furthermore, he pledged to ensure that the Catholic Church was held to account.”

A spokesman also deferred questions to the Justice Department about legal fees paid by Canada.

Government documents suggest the decision to appeal hinged on whether the Catholic entities would seek further relief and expand it to focus on their non-financial commitments under the settlement agreement.

“Should discussions surrounding the order result in a release limited to three financial obligations, Canada will not proceed with the appeal,” says a document dated September 2015. It included an illegible signature of ‘a former minister in Stephen Harper’s Conservative government, at the time. at that time he was in the middle of the federal election campaign.

The document noted that releasing them from some of their non-financial obligations “could pose a significant risk to Canada.”

“A particular concern for Canada would be to release Catholic entities from obligations such as cooperating in the defense or resolution of all Indian residential school abuse claims outside of the settlement agreement.”

The chances of a successful appeal were low: the former head of the AFN

Finally, the document said that appealing would mean Canada would be “back at square one” in trying to reach an agreement on the settlement money with the Catholic entities.

Ken Young, a former regional chief of the Assembly of First Nations and a residential school survivor, said he doubts Canada would have succeeded in an appeal.

“Canada could have litigated until the cows came home,” he said in a recent interview. “I think we’re in a new stage.”

Young, who criticizes how Catholic churches said fundraising would depend on their “best efforts,” believes leaders have learned their lesson.

He points to a pledge made by the Canadian Conference of Catholic Bishops for dioceses to raise $30 million for reconciliation-related efforts over five years. In July, they reported raising $4.6 million.

Young believes the bishops will keep their word, but said given the wealth of the Vatican and the Catholic Church as an institution, fundraising should not be necessary.

“Write a check today; you don’t mind troubling your parishioners to cash it.”