Heathrow Airport and easyJet, two of the airline industry players hit by this year’s flight chaos, have revealed major financial achievements as they describe how they are coping with the summer rush.

The low-cost carrier said cancellations and delays caused by staff shortages at airports and in the air had cost it £133m in the last quarter to the end of June.

EasyJet said its operations had now “returned to normal” after frantic cuts to its schedules since the end of the COVID pandemic restrictions in travel.

Heathrow, which has also struggled to match the recovery in demand, painted a similar picture for its own ability to handle crowds during the summer rush.

However, he stated that the airlines’ ground handling operations continued to demonstrate a drag on reliability.

Earlier this month, and in more than one UK government amnesty which allowed airlines to cancel flights without fear of losing precious take-off and landing slots – Heathrow imposed another limit on the number of departing passengers to increase resilience.

He said people using the airport since last Thursday had enjoyed a “smooth and reliable journey” despite the lack of ground services.

The airport said the increase in passenger numbers meant its adjusted first-half pre-tax loss had narrowed by £466m.

However, it remained in the red by the same measure amounting to £321m and said it did not expect a dividend this year as a result.

Use the Chrome browser for a more accessible video player 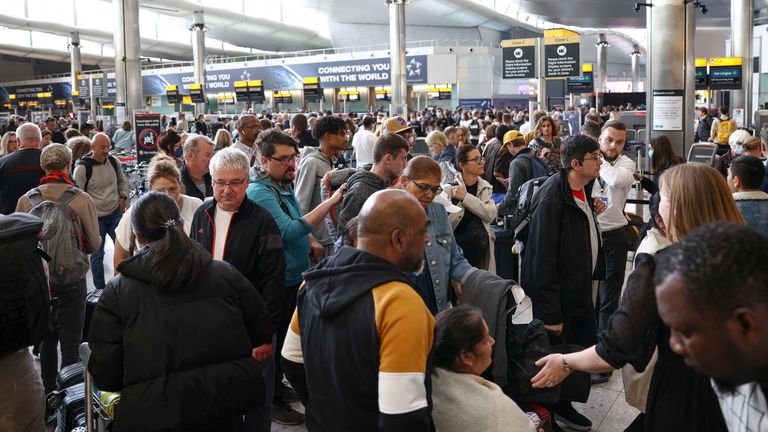 EasyJet posted an overall pre-tax loss of £114m in the third quarter.

It cited the “unprecedented increase” in aviation, along with a tight labor market, for its own operational challenges.

“We took steps to build the additional resilience needed this summer and the operation has returned to normal,” CEO Johan Lundgren told investors.

Despite the problems, it said it had operated 95% of its planned schedule for the quarter and flown 22 million passengers.

It said July, August and September were currently 71% booked, with a load factor slightly ahead of 2019 and the performance of tickets sold 13% above pre-pandemic levels.

Heathrow boss John Holland-Kaye said of its performance: “The summer break is off to a good start at Heathrow, thanks to early planning and keeping demand in line with the operators’ capacity airline land”.

But he added: “We cannot ignore that COVID has left the aviation sector deeply scarred, and the coming years will require investment to rebuild capacity, focusing on safety, customer service, resilience and efficiency .

“Airlines need to recruit and train more ground handlers; airports need to catch up with underinvestment during the COVID years; at Heathrow, that means replacing the T2 baggage system and new lanes security”.