US stocks began August with a volatile trading period, falling after ending their best month since 2020 last week.

The broad S&P 500 traded between gains and losses on Monday, closing up 0.3% on the day, while the tech-heavy Nasdaq Composite shed 0.2%.

Trading volumes in stock markets tend to be lower during the summer holiday period, which can exacerbate swings.

Monday’s declines followed a more than 9% gain for the S&P 500 in July and a 12.3% gain in the Nasdaq that marked the tech benchmark’s strongest month since April 2020.

A series of closely watched indicators of the health of the global manufacturing industry clouded the economic outlook. The Institute for Supply Management’s US PMI fell to 52.8 in July, its lowest level since June 2020. Anything above 50 indicates expansion, but the latest result points to a slowdown in growth.

However, the ISM price index provided an encouraging indication that cost pressures on businesses may be easing. The sub-index fell to a near two-year low of 60 in July from 78.5 the previous month, well below economist forecasts.

Meanwhile, in China, an official survey released over the weekend showed factory activity contracted unexpectedly last month, after new coronavirus outbreaks and stress in the country’s housing market weaken the demand. The manufacturing PMI read 49, down from 50.2 in June.

“Both domestic demand and external manufacturing demand were weak,” Iris Pang, China economist at ING, said in a note to clients.

“Unfinished real estate projects could be at least part of the reason,” Pang said, after debt-ridden developers suspended construction of millions of apartments. Pang also cited a “risk of contagion from financially unhealthy real estate developers to their downstream and upstream industries.” 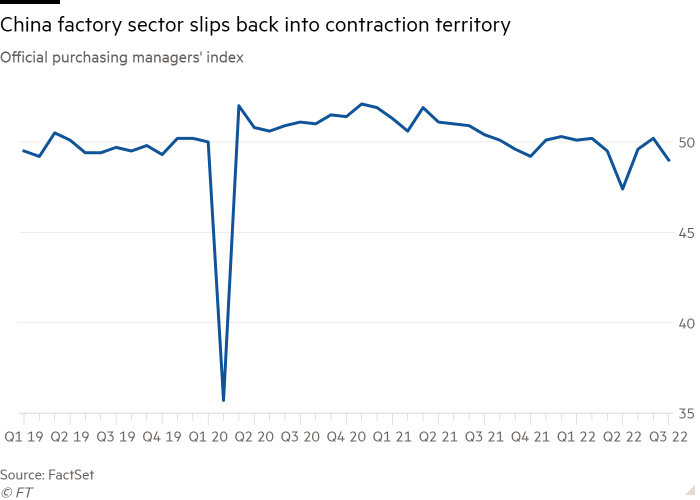 In bond markets, the yield on the benchmark 10-year Treasury fell 0.05 percentage points to 2.59% as its price rose, building on a strong rally in government debt on the week after data showed the US economy contracted for a second straight quarter. .

In recent weeks, investors have lowered their expectations about how much the Federal Reserve will tighten monetary policy to curb red-hot inflation. On Monday, futures markets were pricing in a benchmark interest rate of 3.3 percent for February 2023, down from expectations of 3.9 percent in mid-June. The US central bank’s current target is between 2.25% and 2.5%, after last week it raised borrowing costs by 0.75 percentage points for the second time in as many months.

Markets are “looking beyond the well-known issue of inflation and what they see as a slowdown that will force central banks to ease again,” said Antonio Cavarero, chief investment officer at Generali Insurance Asset Management.

Elsewhere, Italian government bonds rallied after weeks of heavy pressure. The yield on Rome’s 10-year debt fell 0.15 percentage points, falling below 3% for the first time since May.