VAALCO Energy, Inc. (NYSE: ONE) made a splash when he did announced on July 14 it would merge with TransGlobe Energy Corporation (TGA). VAALCO would acquire TransGlobe’s stock on a stock-for-stock basis agreement; each TGA share would exchange for 0.6727 VAALCO shares, representing a premium of 24.9% per TGA share. After the deal, VAALCO shareholders would own 54.5% and TransGlobe shareholders would own 45.5% of the combined company. 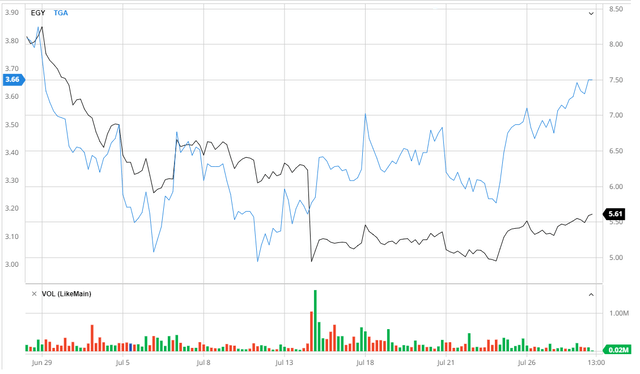 EGY shares fell 16% after the announcement, while TGA only gained 5%. At the close of July 14, the combined market capitalization was $50 million lower compared to the previous day; this represents a loss of 8%. It’s not unusual for the acquirer’s stock to fall, but the drop in combined valuation suggests the market may even see negative synergies.

While I agree that the synergies have not been articulated well, I think at worst they would be zero, but not negative. Rather, I suspect the market may perceive the expansion as a sign that the combined company could embark on a more ambitious growth agenda. Translation: more capex, less return for the shareholder in the short term. The market reaction would then fit with other recent examples where oil companies chasing growth were penalized after an acquisition event.

I remain bullish on EGY, but only because we are coming out of a major correction in the energy sector; not because of the TGA agreement.

I have covered EGY before and will refer to my previous article for more information. Suffice it to say here that VAALCO is a small oil operator focused on offshore Gabon with an underdeveloped interest in neighboring Equatorial Guinea. In December, EGY was trading around $3 and was gearing up for a 2022 with plenty of capital to ensure its production levels are maintained for the next decade.

While EGY has moved up a lot since then, I’ve remained bullish on the stock because the fundamentals have also improved:

My previous analysis assumed a Brent price of $65-$75, while Brent is now $100. VAALCO has been reporting positive news from its drilling efforts and results may even exceed expectations. If 2023 Brent averages $95, EGY can likely generate over $200 million in free cash flow, assuming capex falls after the 2021/2022 drilling campaign and ongoing FSO conversion. Even at EGY’s peak price in early June, the implied EV/FCF multiple was only about 2.5x.

TGA wasn’t on my radar before the merger announcement, but it works in a similar scale like a:

Unlike EGY, however, TGA focuses primarily on onshore interests in Egypt and sources a smaller portion of its production from Canada. TGA’s latest June corporate filing estimated $70 million in annual cash flow at $95 Brent, implying a 4x EV/EBITDA multiple. It is less favorable than EGY, but one could still conclude that both companies were considerably undervalued.

My take on the merger

In addition to the proverbial “synergies,” the other factors driving the merger were “diversification” and “access to capital.” From the joint press release:

The combined company will have a broader and more diversified production and reserve base, improving risk management, increasing the optionality of the portfolio to high-grade investment projects and sequentially towards the most profitable projects, as well as increasing access to a wider set of capital sources. in relation to each company independently.

Thus, we have as drivers “synergies”, “diversification” and “access to capital”. I’m a little skeptical of all three.

I checked Google Maps before writing the article, but Egypt is about 5,000 kilometers from Gabon, not to mention Canada. The assets don’t naturally seem very synergistic: 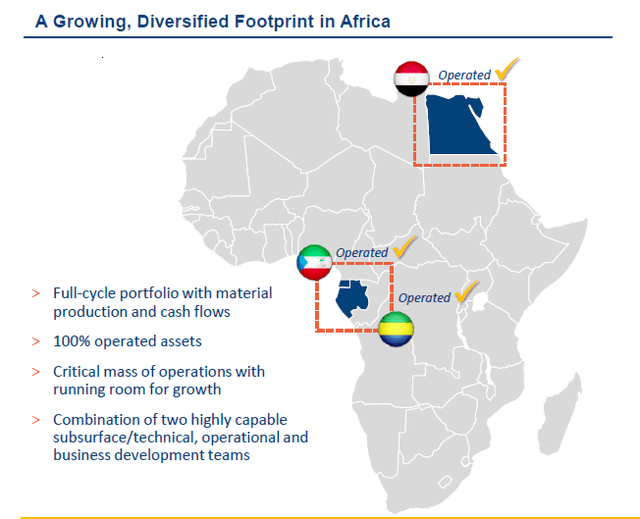 Of course, delisting Toronto will save some costs; there could also be some administrative and support synergies. However, some of the savings will be offset by one-time transaction costs. Operationally, it is not yet so clear what will drive the synergy.

By focusing only on offshore Gabon with underdeveloped interest in neighboring Equatorial Guinea, VAALCO is clearly subject to specific country risks. A combined company that gets half its output from Egypt and some from Canada will be less risky.

But the question is less risky for whom? For management or for shareholders? I personally do not have 100% of my portfolio allocated to VAALCO and it is reasonable to assume that most shareholders are already diversified. Without real synergies, we’re probably looking more at GE-style diversification where stand-alone companies operate under the umbrella of a conglomerate. These structures add diversification for management, but are not truly incremental to the already diversified marginal investor.

Being bigger and having more favorable access to capital markets is usually a good thing. But why would the combined company need more capital? Logically, it has to be to look for growth opportunities, which is why I think the market may have reacted negatively.

Management naturally looks at the business for the long term and expansion makes sense; this is how the oil companies have always operated. Unfortunately, we live in strange times where the long-term future of oil is less certain, despite the current energy policy debacle in Europe and the US.

So the market doesn’t really want the oil companies to grow, but to go into some kind of “smoking mode” and begin to slowly liquidate themselves through cash distributions. This year we’ve seen other examples of companies being penalized for perceived “empire building”; on the contrary, buybacks and special dividends have been generously rewarded.

The pro forma combined cover it has a dividend of $28 million, which is only about a 4% yield. The market will likely need long-term guidance on the cash return strategy; a 4% return can be obtained from Exxon Mobil (XOM) with much better diversification.

Probably not, at least not too much. EGY does better in some metrics, but TGA looks better in others. Current production is roughly the same:

TGA management projected $70 million of annual free cash flow (“FCF”) at $95 Brent; I think VAALCO’s normalized FCF would be at least $200M under the same pricing assumption. I would also add that TGA’s PSC in Egypt looks nominally less favourable, with up to 80% of the government taking profit oil (when Brent is above $100 and production is above 25,000 bbl/d). In VAALCO’s case, Gabon would only take up to 60%, but EGY’s PSC also includes a royalty. It is difficult to compare tax regimes, however, when the cost structure is different.

So overall, it’s a tough call to make. TGA shareholders have more certainty through the 25% premium because it is unclear whether TGA stock would have outperformed EGY relatively more. But then TGA also gives up the advantage if that had happened. Moreover, if the market continues to dislike the deal and discount EGY’s share price, TGA shareholders could even end up worse off in absolute terms. Relatively speaking, though, I’d say EGY shareholders are getting the worse end of it.

What does the market think?

Now that we have two weeks of trade data after the announcement, we can also get a better idea of ​​how the market is evaluating the deal.

Between July 13 and 14, the combined market capitalization fell $50 million or 8%. Not a good sign, and I already commented on my hypothesis.

The agreement also established a notional price for TGA derived from the price of EGY and the exchange ratio. Since July 14, TGA has traded at a volume-weighted average discount of approximately 4%. As a “merger arbitrage spread”, this is not an impressive number. Based on a research study I looked up, the average merger arbitrage in the large sample studied was 6% with a standard deviation of 11%. I am led to conclude that the market believes the deal will be done. There is also a severance payment of about $9 million for each side, which is not insignificant.

What about share price behavior relative to the broader energy sector? I calculated the correlation matrix of daily returns for the 30-day period before the press release and the two weeks since the announcement:

I used the Energy Select Sector SPDR Fund (XLE) as a benchmark.

EGY’s correlation with the XLE hasn’t really changed. TGA is now close to 100% correlated with EGY, which of course makes sense. Consequently, the correlation of TGA with XLE has also changed and now matches that of EGY.

In other words, changes in market perception of the energy sector affected EGY similarly before and after the merger news. The price drop on July 14 was a one-time (negative) adjustment to reflect the news.

Since July 14, the combined market capitalization has almost returned to the previous level, with a gain of 7.4% through July 27. But the XLE rose 10.7%, so the negative impact of the merger news remains.

EGY and TGA shareholders likely have reason to debate who got the worse end of this deal, but it’s pretty much water under the bridge at this point. We have two weeks of data, showing a modest merger arbitrage spread, as TGA stock now tracks EGY very closely based on the exchange ratio.

Going forward, the shareholders of EGY and TGA have the same choice, that is, whether they want to hold the shares of EGY (combined company) in the long term or not. For me, as a VAALCO shareholder, I see it as follows:

I tend to agree with the $50M market penalty on the combined market cap. Bundling disparate assets doesn’t destroy value, but perhaps signals more aggressive growth ambitions at the expense of shareholder returns. However, the news added to a 30% correction in the broader energy sector that had nothing to do with the merger news. That is, EGY fell from $8.60 to $6.23 on the industry downtrend alone, and the merger further reduced it from $6.23 to $5.20. Given that we now seem to be coming out of this huge correction, I think a ‘buy’ rating is still appropriate.

Bottom line, like the market, I’m not happy with the merger, but I think given the macro picture it makes sense to stay long EGY or TGA for now, whichever you have.

Longer term, I personally would like to hear more details about “synergies” and how the company plans to return cash to shareholders. As much as I’m bullish on oil, I think 2022 may be a little late to invest in “growth” oil companies.