Income is still very high healthy, growing more than 30% year-on-year and constantly exceeding expectations. However, profitability remains a challenge, as the company reported a non-GAAP operating loss of $11 million in the first quarter of 2015, including a loss of free cash flow of 54 million dollars.

During a time when investors are placing more emphasis on profitability, UiPath may continue to have negative sentiment on the stock.

With the company reporting earnings at the end of August, I think management may need to provide a more cautious tone related to guidance. The macro environment remains challenging and with the US dollar strengthening, foreign currency could become a major headwind. UiPath has 50% of its revenue from international currencies, so the stronger USD has a negative impact on its international revenue.

In addition, investors continue to focus on profitable companies that may fare better during a potential recession. While UiPath could continue to see strong demand, its profitability remains a bit of a concern.

The valuation is also currently at 7.5x FY23 earnings, which remains quite expensive given the current challenging macro environment. Even in a bullish FY24 earnings scenario, the valuation is still around 5.5x, which isn’t cheap.

For now, I’m cautious on the company heading into Q2 earnings with the possibility that management will lower its guidance expectations. While I am a long-term believer in the company, there appears to be some risk to earnings.

Although Microsoft (MSFT) is UiPath’s biggest competitor, UiPath has consistently been named the Robotic Process Automation Leader by Gartner. 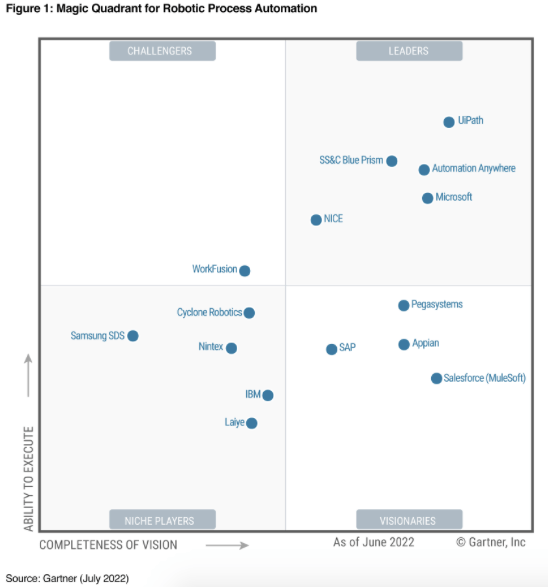 Although UiPath is smaller in size, they still compete well against Microsoft, Automation Anywhere, and SS&C Blue Prism. The market remains competitive as companies seek to automate certain processes and the global pandemic certainly accelerated the pace of digitization.

Even though the company reported earnings in early June, we’re still several weeks away from another update from the company.

During its Q1, the company grew revenue 32% year-over-year to $245 million, beating expectations by $20 million, implying an 8% beat in revenue. The company’s non-GAAP gross margin remained strong at 85%, although it was down slightly from 88% in the year-ago period. Higher wage and expense inflation certainly took a toll on the company’s gross margins, though investors will likely continue to see gross margins around that 85% level. 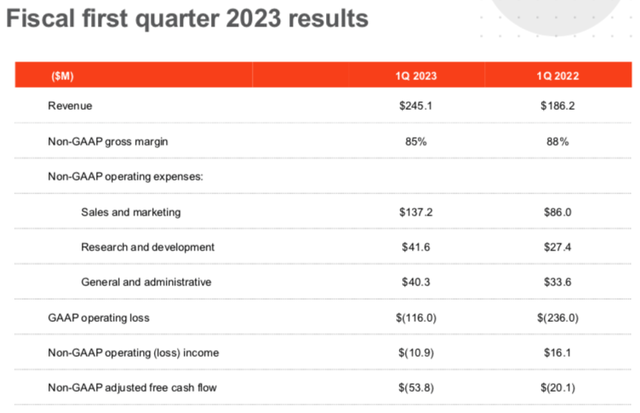 Additionally, the non-GAAP operating loss for the quarter was $11 million, which was nearly $30 million lower than the $16 million profit seen in the year-ago period. The main driver was a $50 million increase in sales and marketing expenses. Given the significant growth market and the company’s steady 30%+ revenue growth, it’s no surprise that they’re investing heavily in sales and marketing.

And those benefits are paying off. During the quarter, ARR reached $977 million, representing a 50% year-over-year increase and reflecting new net ARR of $52 million. Additionally, the dollar-based net retention rate was 138%, clearly demonstrating the desire of UiPath customers to spend more with the company over time.

As the current challenging macro environment and currency headwinds become more difficult due to the strength of the US dollar, the company may be forced to lower its guidance. During the company’s FQ1 earnings call, management addressed some of these headwinds.

One of UiPath’s strengths is our global presence, which gives us diverse perspectives and access to talent. We price in local currency and with more than 50% of our business conducted outside of North America, our results are subject to currency volatility. We recognize that macroeconomic and geopolitical issues are impacting global markets and the strengthening U.S. dollar continues to create currency headwinds for our business. As we did in March, the guidance we provide this afternoon takes into account the current operating environment and includes a currency headwind offset for the growing business momentum.

These challenging macro factors have continued over the past few months and may continue for the remainder of the year. So it wouldn’t be surprising if the company lowered its full-year expectations given the larger currency’s headwinds and the more challenging macro environment.

Shares are down nearly 60% year-to-date as investors steered away from unprofitable and highly valued companies. However, since the company reported earnings, the stock is up more than 5%.

UiPath’s biggest concern remains profitability. With a non-GAAP adjusted free cash flow loss of $54 million, investors may continue to hold it against the company in the current environment. With fears about a possible recession and interest rates continuing to rise, investors have shifted their focus to more stable and profitable companies. 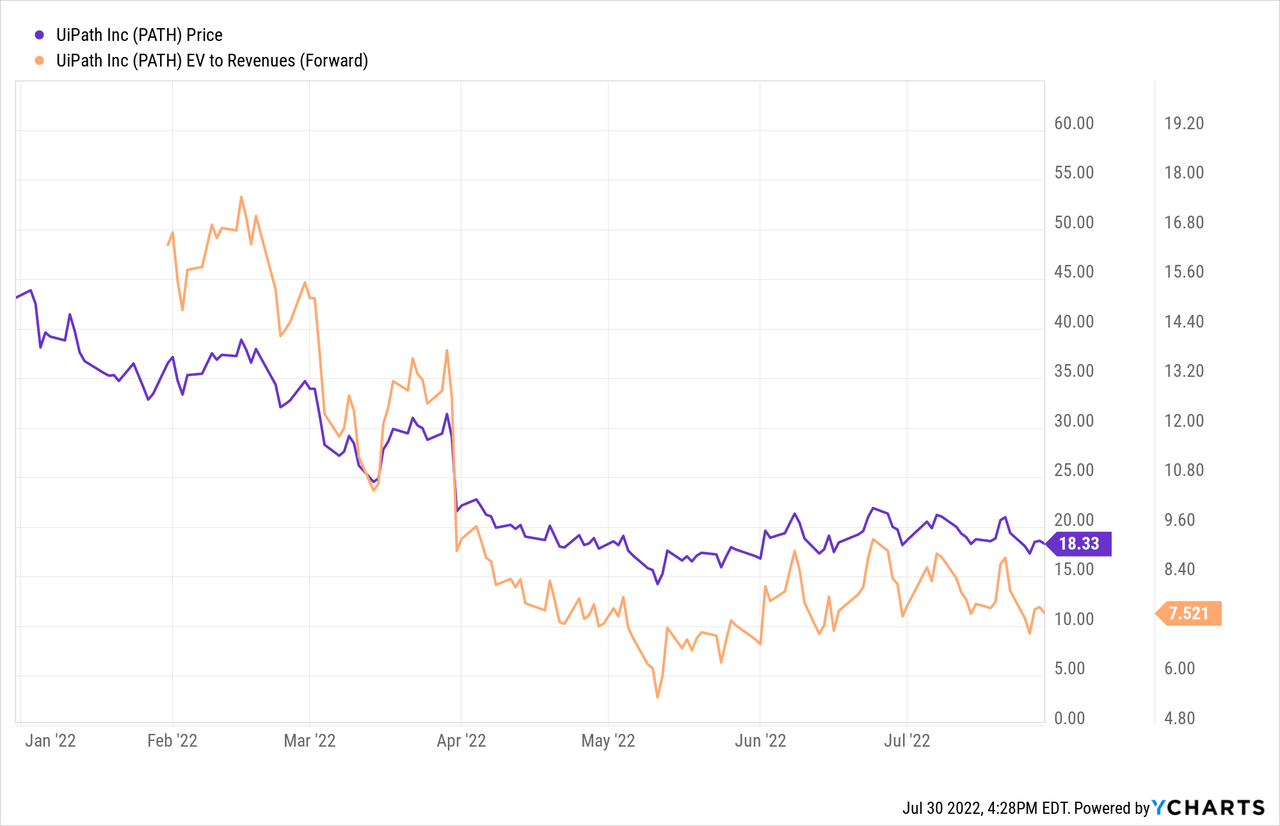 The company has a current market cap of about $10 billion and with $1.8 billion in net cash, the company’s value currently stands at around $8.2 billion.

UiPath’s full-year revenue guidance of $1.085 billion to $1.09 billion implies a FY23 revenue multiple of approximately 7.5 times. While the stock previously traded at forward earnings multiples above 10x, it doesn’t seem likely that we’ll return to an environment where investors are willing to pay that much for growth stocks.

Yes, revenue growth could remain very strong for years to come, but profitability is increasingly important as we potentially enter a recession.

Even if we see FY24 revenue come in at $1.5 billion, which would be above consensus expectations for $1.39 billion (per Yahoo Finance), the implied revenue multiple of 5.5x fiscal year is still an expense for a company with barely any profitability.

For now, I remain cautious on this name in its Q2 earnings report, as we could see management become more cautious about its outlook given the challenging macro landscape.