The eurozone is expected to post growth slightly above zero in the second quarter, but economists expect a steady deterioration in the bloc’s economy over the next year as recession risks loom.

Eurostat’s first estimate of second-quarter gross domestic product, released on Friday, is expected to show a 0.1 percent expansion from the previous quarter, according to a Reuters poll. That marks a sharp deterioration in growth from 0.6% in the previous three months and would be the weakest performance since a surge in coronavirus infections and restrictions dragged the bloc into a brief recession in early 2021.

Russia’s invasion of Ukraine in February has driven up energy and food prices, eroding consumer purchasing power and threatening to trigger an energy crisis that will leave manufacturers and households without gas next winter.

The European Commission’s consumer confidence survey hit a new low in July, with a question asking shoppers about their willingness to make major purchases delivering the lowest response since April 2020.

Political instability in Italy ahead of elections in September is adding to concerns about the bloc’s prospects.

“It’s like watching a car crash in motion, a slow-burning crisis,” said Katharina Utermöhl, senior European economist at German insurer Allianz. “Unlike the pandemic, there is unlikely to be a marked upswing next year.”

A bright spot is tourism and hospitality. The eurozone economy is likely to get a boost from more people taking advantage of eased coronavirus restrictions to go on holiday or eat out this summer as they spend some of the extra cash they saved during the pandemic.

But that boost is likely to be tempered by growing household anxiety about the high cost of living. Most eurozone consumers are feeling the pinch as their wages have not kept pace with inflation, now at a record high of 8.6%, leaving them worse off.

“We are forecasting only a small boost to growth in tourism, travel and accommodation this summer as the decline in real incomes picks up pace, dampening consumer discretionary spending,” said Veronika Roharova, head of developed economies for Europe at Credit Suisse.

Russian energy group Gazprom said this week that flows on its main Nord Stream 1 pipeline to Germany had halved to about a fifth of their normal levels as of Wednesday due to maintenance, intensifying the concern that Moscow is weaponizing energy supplies to Europe. European gas prices rose 30 percent in the first two days of this week. They have multiplied by nine in the last year.

A prolonged reduction in Russian gas flows to Europe could leave the region unable to sufficiently fill its storage facilities ahead of this winter’s heating season, forcing supplies to be rationed for heavy industrial users. 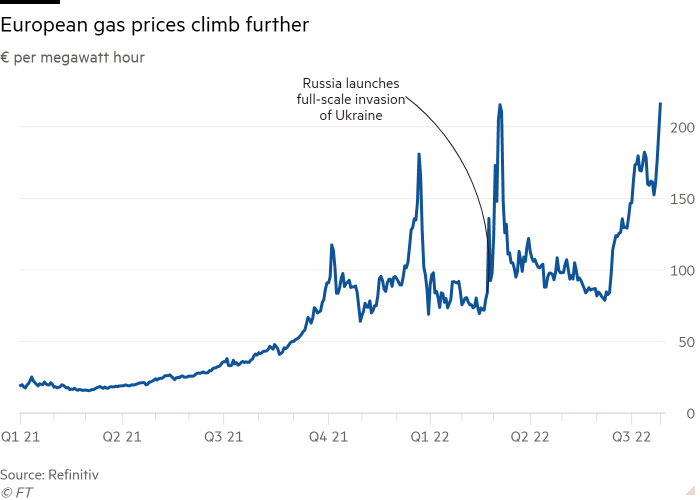 A total cessation of flows “could force energy rationing, affecting major industrial sectors, and sharply reduce euro area growth in 2022 and 2023”, the IMF warned on Tuesday, as it cut its forecast of German growth next year by 1.9 percentage points to 0.8 percent, the biggest cut of any country. Without a shutdown, the fund expects the euro zone to grow 2.6% this year and 1.2% next year.

The EU has set a target for most countries to reduce gas consumption by 15 percent. The German government this week urged households and businesses to save even more, and Berlin plans to allow energy companies to pass 90 percent of their higher costs on to customers. “We are in a serious situation,” said Robert Habeck, Germany’s economy minister. “It’s about time everyone understood.”

Government measures to reduce fuel, electricity and public transport prices are likely to have kept a check on inflation. But consumer prices are still expected to have risen to a new eurozone record of 8.7% in July, according to Eurostat data released on Friday. Higher prices have been blamed on a string of gloomy economic data. These include the first drop in eurozone business activity for 17 months, as indicated in the latest S&P Global survey of purchasing managers, and German business confidence falling to a two-year low, according to the ‘monthly survey of the Ifo think-tank.

Meanwhile, consumer confidence fell to a record low this month, according to the European Commission’s monthly survey.

Banks are also tightening the supply of loans to households and businesses in the euro zone, a trend likely to accelerate after the European Central Bank raised interest rates for the first time in more than a decade this week past

The worsening outlook has already led investors to bet that the ECB will stop raising rates much sooner than expected just a few months ago. 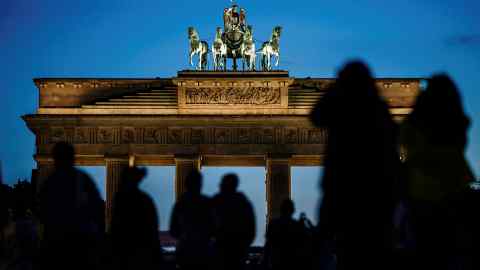 Germany’s 10-year bond yield, a benchmark for euro zone interest rates, fell below 1% on Tuesday for the first time since May after falling from an eight-year high years of last month, of 1.77%.

“The window of opportunity for the ECB to continue raising rates is closing as the economy weakens,” said Spyros Andreopoulos, senior European economist at French bank BNP Paribas.

The nightmare scenario for the ECB and governments would be stagnation, with a disruption in Russian gas supplies sending the eurozone into recession, while the energy crisis and a weaker euro continue to push prices even higher .

On Wednesday, Goldman Sachs cut its forecast for the region, saying a technical recession with two consecutive quarters of negative growth this year was now more likely, even if Russia did not completely cut off energy supplies . A sharper drop was likely “in the event of an even more severe disruption of gas flows, a renewed period of sovereign stress or a recession in the United States.”

Credit Suisse’s Roharova predicted eurozone GDP would fall by 1-2% next year if Russian gas is cut, while inflation would remain well above the ECB’s 2% target for at least another year. “Inflation may remain high or decline only gradually, even as growth weakens,” he said.