In July, TV Rain, Russia’s only independent news channel, resumed broadcasting from Latvia after a five-month hiatus. But soon after, reporters realized that not everyone in the Baltic state was happy to have them there.

Latvia’s security services have warned that some of the hundreds of Russian journalists in the country, who fled Russia after it banned critical coverage of its invasion of Ukraine, could be undercover spies. Riga has also led calls to ban all Russians from obtaining EU tourist visas, with media workers facing an even more uncertain future.

The backlash has stalled Latvia’s effort to make Riga a hub for independent journalists from Russia and illustrated the difficulties for Kremlin opponents operating in a country with bitter memories of Soviet occupation.

“Is inevitable. There is a war and many other painful moments between Latvia and Russia,” said Tikhon Dzyadko, editor of TV Rain. “I am not surprised by the harsh reception; I am sad that some people are not even looking at what we publish. But no We won’t change anything we do.”

TV Rain broadcasts to its growing audience, including 3.3 million subscribers to its YouTube channeloffer a radically different picture of the Ukraine conflict on Russian state television, which does not call the campaign a “war” or an “invasion.”

The channel has run several exhibitions and even interviewed a Ukrainian official who spoke of the pleasure he felt “watching videos of dead Russian soldiers”.

Dzyadko said he would not return to Russia “until it becomes a normal country again” and wanted TV Rain “to do everything possible to make this moment happen sooner.”

TV Rain editor Tikhon Dzyadko: “I’m not surprised by the harsh reception . . . But we won’t change anything we do” © Denis Kaminev/AP

After a brief stay in Georgia, Dzyadko and channel founder Natalia Sindeyeva sought a safer home in the EU and opened a new headquarters in Latvia.

The government helps them with the legal and financial fine print. Latvia has admitted 247 Russian journalists since the start of the war and 200 of their relatives, a Foreign Ministry representative told parliament this month. (The Financial Times has also temporarily relocated some of its Russian correspondents to Riga.)

“The Latvian government made a clear political decision,” said Kirill Martynov, who is editing a new edition of the Novaya Gazeta newspaper in Latvia after its Russian edition suspended publication under government pressure in March. “The idea is that Riga will fight for freedom of expression.”

Riga also hopes that the effort to boost independent Russian media will sway the country’s large ethnic Russian community, which is about a quarter of its total population of 2 million, toward its pro-Ukraine stance. Regulators removed local broadcasts from Russia’s two main state television channels last year and banned the remaining 80 Russian entertainment channels in June.

The large Russian-speaking minority, some of whom harbor pro-Moscow sentiment, have long been a source of tension with the Kremlin, which accuses Latvia of oppressing them.

In May, hundreds of people laid flowers at a monument celebrating the Soviet victory over Nazi Germany in World War II, an event the Kremlin has used to drum up support for its invasion of Ukraine. The incident prompted lawmakers to speed up plans to remove 69 Soviet monuments across Latvia.

The tension over the monuments, which also came to the fore in Estonia this week, “is a crucial story” for TV Rain as Latvia prepares for elections in October, Dzyadko said. “It’s about Russian speakers and non-Russian speakers, the feeling about it [second world] war and how Russia has been manipulating those feelings for decades.”

But it has made the channel the focus of criticism from coalition lawmakers who want NATO member Latvia to go further to reduce the Russian presence. Jānis Dombrava, an MP from the National Alliance party, said he saw no benefit for Latvia in “stimulating the Russian community with journalists who will teach us not to tear down the monument”.

When anchor Ekaterina Kotrikadze challenged the mayor of Riga, Mārtiņš Staķis, about the monuments, the interview sparked a furious backlash. Riga theater director Alvis Hermanis wrote on Facebook that now “it seems that their goal is to destroy our country from within.”

In other broadcasts, Kotrikadze has discussed EU sanctions and visa restrictions that have made it harder for anti-Putin Russians who watch the channel to move to Europe. This has led to accusations from prominent Latvians that TV Rain is trying to undermine Western support for Ukraine.

Staķis said the criticism of TV Rain was “unfair” and praised Kotrikadze for not giving him “a pat on the head”.

“TV Rain is a huge possibility for Latvia – we have to treat it as such.” 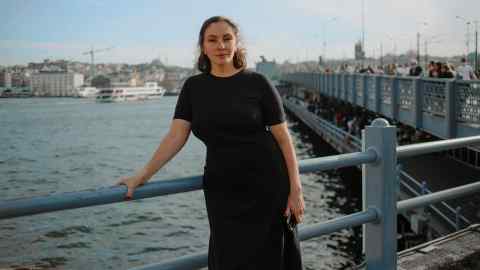 The backlash has meant that Russian journalists are not exempt from a ban introduced in early August on issuing new visas, except to attend funerals. And this week, Latvian Prime Minister Krišjānis Kariņš said the coalition would introduce legislation that would prevent Russians from renewing their residence permits.

A spokesman for Kariņš told the FT that the government “had no plans to change our policy regarding Russian independent journalists already working from Latvia”.

But journalists may face tighter scrutiny from Latvia’s intelligence services, which have expressed concern that Russia could use them as pawns.

“The activity launched by independent Russian media in Latvia, which is directed against the Putin regime, will force the Russian authorities to pay more attention to our country,” said the VDD, Latvia’s counterintelligence service. “It cannot be ruled out that certain media outlets that started operating in Latvia or their representatives have ties to Russian intelligence and security services.”

Martynov rejected the idea that there were spies among the exiled journalists. “Most of these people left Russia because they could have been sent to prison there,” he said.

TV Rain journalists feel trapped, but are determined to continue their work. Dzyadko, who is married to Kotrikadze, said the channel was trying to find a way to balance the different expectations of its growing audience amid pressure on Russians in Latvia.

“One of the main questions is how to find the right tone of conversation,” he said. “What is happening is a catastrophe. Ukraine has been destroyed and Russia is degrading. Everyone is on edge. We have to find the right way to talk about it.”