US stocks fell on Thursday as anxiety grew on Wall Street over key inflation data due on Friday.

The S&P 500 fell 2.4% and the Dow Jones Industrial Average dropped 640 points, or 1.9%. The Nasdaq Composite fell 2.8%. Most of the losses came in the final hour of trading as selling accelerated to the end of a bearish session.

Investors are gearing up for the Bureau of Labor Statistics the latest Consumer Price Index (CPI) on Friday as they look for more clues about how aggressively the Federal Reserve will raise interest rates. The May reading is expected to show that inflation persisted in May. Consensus economists are looking for headline inflation to rise to an annual rate of 8.3% in May, the same as the April press, and 5.9% excluding food and energy prices.

The drop also followed labor market data that disappointed ahead of the open and the European Central Bank’s confirmation of its intention to raise interest rates next month.

Weekly claims for unemployment insurance rose to 229,000 last week, the highest number since January, and a sign of potential increased stress in the labor market. Faced with these data, the three main indices pointed to gains north of 0.4% at the opening.

Oil prices retreated slightly but remained above $120 a barrel, and the yield on the US 10-year Treasury edged up to 3.06%, north of the 3% level which was breached at 10 years earlier this week for the first time since early May.

Investors continue to look for clues about how the economy is faring amid tighter financial conditions and how aggressive the Federal Reserve’s rate hike cycle may be before a possible pause.

The latest weekly jobless claims report follows last Friday’s strong May jobs data that likely signaled to policymakers that current labor market conditions can support further monetary tightening. Central bank officials have taken cues from the labor market on the pace of rate hikes as it battles inflation, with policy aimed at cooling demand for labor enough to keep the unemployment rate from rising too high.

“The increase in initial jobless claims is in line with anecdotal evidence provided by CEOs who are watching their head counts closely, often masking their actions by quietly giving pink slips,” he said. said FWDBONDS Chief Economist Christopher S. Rupkey in a morning note. “One thing is for sure, unemployment has nowhere to go, it is driving up the costs of inflation for every business in the country and cost control measures need to be implemented which are likely to fall on deaf ears of the workforce”.

Traders work on the floor of the New York Stock Exchange during morning trading on June 8, 2022 in New York City. (Photo by Michael M. Santiago/Getty Images)

Elsewhere in the markets, shares of Tesla (TSLA) closed slightly lower after the electric vehicle’s shares rose as much as 3% in intraday trading following an upgrade from UBS to Buy. The report also said the electric vehicle giant is “best positioned to become one of the top 3 global automakers by 2030.”

Here’s how the S&P 500, Dow and Nasdaq capped another poor trading session:

Here’s where the major indexes traded at the start of Thursday’s main session:

The latest weekly jobless claims report suggests some softening in the US labor market.

Initial filings for unemployment insurance it rose to 229,000 last week27,000 more than the previous week and the highest weekly total since the week of January 14th. Economists had expected initial claims to come in at 206,000, according to Bloomberg estimates.

Continuing unemployment insurance claims stood at 1.306 million for the week ended May 28, unchanged from the previous week.

Initial claims were a closely watched source of stress on the labor market in the early days of the pandemic, totaling more than 6 million in a single week at its peak in April 2020.

Claims have since fallen to multi-decade lows, but economists have noted that this data series provides the best real-time window into the state of the US labor market. In this context, the recent increase in initial claims requires close monitoring in the summer months.

Here were the top moves in futures trading before the market opened on Thursday: 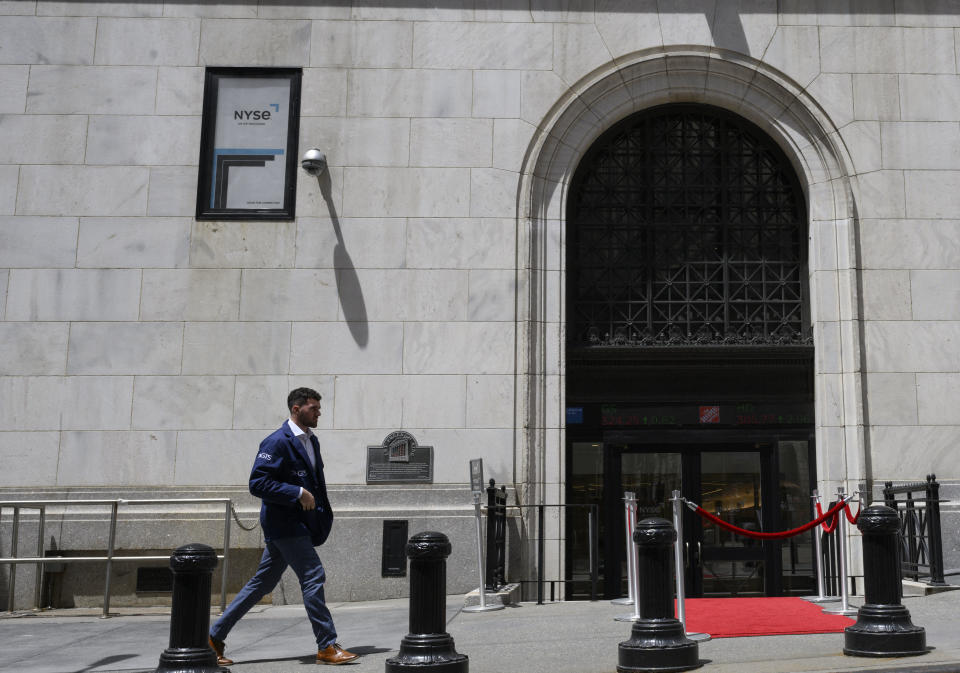 A trader walks past the New York Stock Exchange (NYSE) in New York on May 27, 2022. (Photo by Angela Weiss / AFP) (Photo by ANGELA WEISS/AFP via Getty Images)