Federal agents searched Donald Trump’s Florida residence on Monday, a major step by prosecutors against the former president over his handling of classified information that could deepen his legal troubles.

Trump revealed the raid in a statement posted on social media in which he said a “large group” of FBI agents were at the Mar-a-Lago club, his Florida residence.

“[It] it is currently besieged, raided and occupied by a large group of FBI agents. Nothing like this has ever happened to a president of the United States,” Trump said.

The Justice Department and the FBI declined to comment on the raid, which immediately sparked a political firestorm and strong Republican protest.

A person familiar with the investigation said it was related to Trump’s handling of sensitive material from his time in the White House. Earlier this year, 15 boxes of classified documents, including some that were marked “top secret,” were passed to the National Archives by Trump, who had kept them at his Florida home.

Trump said “the unannounced raid was neither necessary nor appropriate” as he had been “working and cooperating” with the relevant government authorities, though he did not specify on what issue. “They even broke into my safe!” Trump wrote.

Police outside Donald Trump’s Mar-a-Lago residence in Florida. A person familiar with the search said it was related to Trump’s handling of classified documents © Giorgio Viera/AFP/Getty Images

The FBI’s search represents a notable step by US authorities to scrutinize the actions of a former president. That move would have to be cleared by a judge and likely approved at the highest levels of the Justice Department, including Attorney General Merrick Garland.

Garland had told reporters in February that the National Archives had notified the Justice Department about the classified material at Mar-a-Lago, adding: “We’re going to do what we always do in these circumstances: look at the facts and the law and take it from there.”

Eric Trump, the former president’s son, defended his father’s actions on Fox News, saying he “always kept clippings, newspaper articles, pictures, notes of ours,” as well as “boxes when he moved from the White House,” but said the former president maintained an “open door policy” when it came to allowing authorities access.

Trump has faced mounting pressure over his efforts to overturn the results of the 2020 presidential election, which he lost to Joe Biden, and the Jan. 6 attack on the U.S. Capitol just days before the handover of power

The search also comes as Trump weighs a bid for a second term as president in 2024. He still maintains a solid grip on the Republican Party’s conservative base, making him the natural favorite in a primary for his party’s nomination. .

Some Republicans have been looking to alternative candidates, such as Florida Gov. Ron DeSantis or former Vice President Mike Pence, arguing that Trump could be a toxic choice in a general election given the chaos of his four years in office and his denial of the result of the 2020 vote. 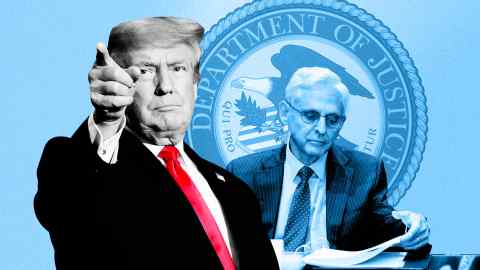 “The FBI raiding Trump’s beloved Mar-a-Lago opens the 2024 Republican primaries wide open. The Trump era is over and it’s anybody’s ball,” said Dan Eberhart, a Republican donor who was with Trump at Mar-a-Lago three months ago.

A White House official said: “We had no notice of the reported action and are referring you to the Department of Justice for additional information.” Trump was in New York City at the time of the raid and not in Florida.

Capitol Hill Republicans sharply criticized the attack, saying it was more about political retribution than law enforcement and vowing to fight back.

DeSantis wrote on Twitter that the research showed how federal agencies were being used to target “political opponents” and turn the US into a “Banana Republic.”

Kevin McCarthy, the Republican leader in the House of Representatives, said the Justice Department had reached “an intolerable state of weaponized politicization” and vowed that if his party regained control of the lower house of Congress, lawmakers would an “immediate supervision” of their movements.

“Attorney General Garland, preserve your documents and clear your calendar,” he said in a statement.

But the Democrats pushed back. “Elected officials like me are not above the law. Neither does Trump,” Ted Lieu, a California House Democrat, wrote on Twitter. “Why would you exempt someone from an authorized search warrant?”