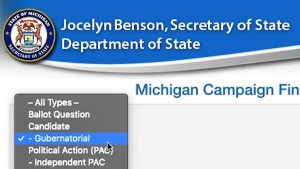 With just over a week to go until the Primary, candidates and campaigns have opened their finances. Deadlines for campaigns to report their finances came on Friday and Monday, depending on the type of campaign.

This gives the public an inside look at how much money campaigns have raised, where it’s coming from and how it’s being spent.

“You’d rather have more money than not,” said Adrian Hemond of Grassroots Midwest.

This shows when you look at the campaign finance disclosures on the Secretary of State’s website. Now each candidate states how they got their money and where it’s going.

It can give you an idea of ​​how the candidate is doing or how much support he has. In a midterm election with a Democrat in the White House, Republicans should have a money advantage. This has not necessarily been played.

Money is not everything. One of the biggest fundraisers in any House race is Betsy Coffia of Traverse City. He reported that $186,000 had already been raised.

“He’s got a lot of money so he’s going to be competitive,” Hemond said, “but the president is really unpopular right now, the economy’s not in good shape, so he’s going to have a very tough election up there. In a seat that he’s raced a couple of times before, in better environments, and he hasn’t been successful.”

The reports also show how much the candidates are spending on themselves, guys like Kevin Rinke and Perry Johnson are self-funding, and when it’s over, they can pay themselves with whatever they have left over or donate the rest.

“They’re allowed to make political contributions with it,” Hemond said, “up to the legal limits of their type of committee.”