Emily Roland, co-investment strategist at John Hancock Investment Management, told Yahoo Finance that the strong July jobs report shows the economy is “not there yet” when it comes to recession.

Michael Pearce, senior U.S. economist at Capital Economics, was even more bullish in an email after Friday’s data: “The unexpected acceleration in nonfarm payrolls growth in July, along with the additional decline in the unemployment rate and the renewed rise in wages. pressure, making a mockery of claims that the economy is on the brink of recession.”

But bond markets remain concerned. And that concern is reflected in how yields moved after Friday’s data.

Longer-term bonds don’t typically yield less than shorter-term bonds, as investors demand more compensation for lending longer to the US government (or most any borrower, for that matter).

So investors watch these “investments” closely in the 2-year/10-year spread because they have preceded each of the last six US recessions. This yield curve inverted in 2019, before the pandemic, and flared up again in April of this year.

The spread between the 2-year and 10-year Treasury yields inverts even more deeply after Friday’s jobs report. (Source: FRED)

“There’s more that needs to happen before the recession is completely over,” Roland said. “But [we’re] probably going there with such a deeply inverted yield curve.”

At issue is the Federal Reserve’s next move, especially as high inflation continues to pressure policymakers to raise borrowing costs in an effort to cool economic activity. The central bank moved in both June and July to raise interest rates by 0.75%, the biggest moves made in a single meeting since 1994.

The Fed hopes to moderate economic growth without raising rates so high that companies start laying off workers. July’s jobs report supports the Fed’s case for leaving the healthy labor market intact, but stronger-than-expected wage gains may push employers to continue to pass higher costs on to consumers. 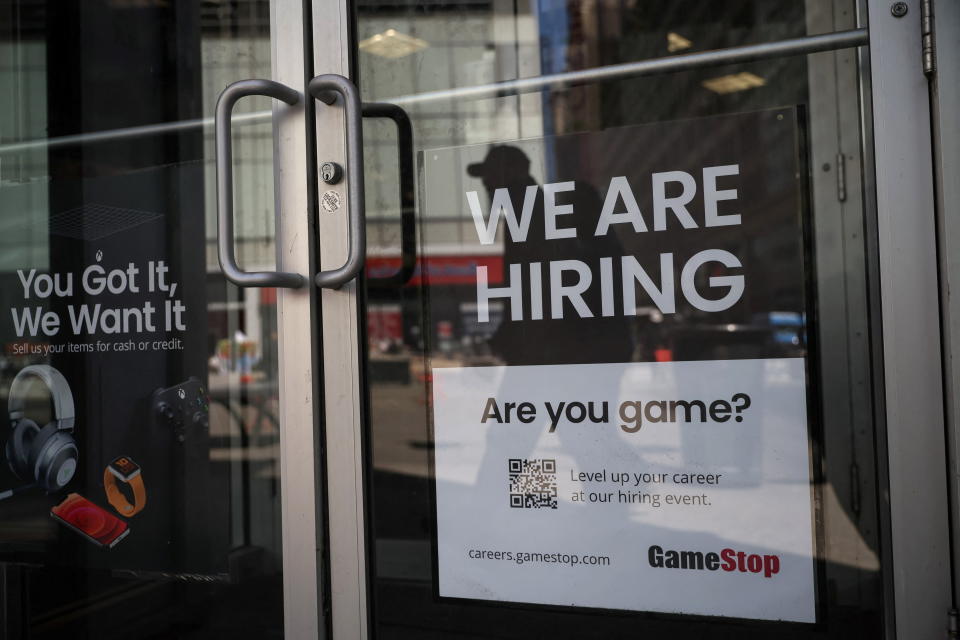 A rental sign is posted on the door of a GameStop in New York City, U.S., April 29, 2022. REUTERS/Shannon Stapleton

“A slower pace of wage growth would clearly add to the goal of reducing persistently high inflation, but today’s report is unlikely to bring comfort to the Fed on that front,” BlackRock’s Rick Rieder wrote on Friday.

Now, markets are increasingly pricing in the odds of a more aggressive move in interest rates at the Fed’s next scheduled meeting, which concludes on September 21. Fed funds futures now assign a 70% probability of a 0.75% move in September, which is remarkable. change of 0.50% move markets were pricing in ahead of Friday’s jobs report.

This reassessment of expectations of Fed rate changes is also behind the move in bond markets, as short-term Treasuries (such as the US 2-year) tend to closely track the Fed’s policies on the federal funds rate.

“The yield curve was inverted and now it’s really inverted,” Roland said. “And we know that’s a classic harbinger of a recession.”

Brian Cheung is a reporter covering the Fed, economics and banking for Yahoo Finance. You can follow him on Twitter @bcheungz.