This story was originally published for Reading The Markets subscribers on August 12 and has been updated as of the morning of August 16. 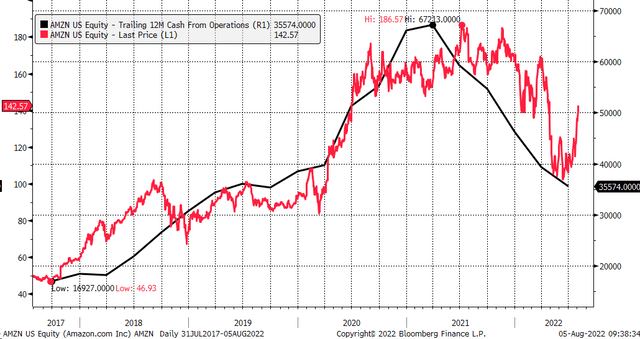 The stock market capitalization now trades at more than 40 times trailing 12-month operating free cash flow, well above the historical average of 28 dating back to 2014 and more than two standard deviations above this average

Going back to 2010, based on a historical average of about 28.5, the current stock would be worth roughly $99. It would suggest a greater risk that the recent rally in the stock is now greatly overextended and looks unlikely to last. 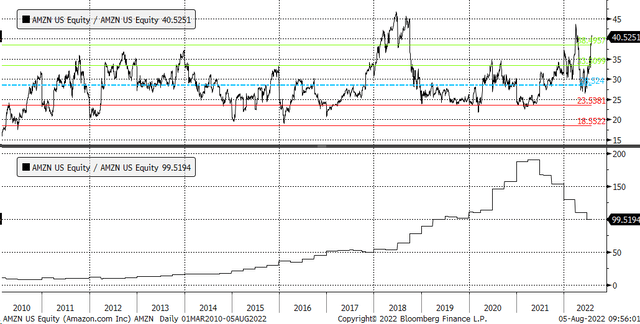 Options data shows someone is making a big bet that Amazon stock will sell off in mid-September. Open interest for September 16, $140 puts and calls was up about 15,000 contracts. The data shows put contracts traded at “ASK” and bought for $4.55 per contract. The option bet would imply that Amazon would fall below $135.45 by mid-September. It’s also a big bearish bet, as the trader pays about $6.8 million in premiums.

Amazon shares have recently risen to a resistance area around $145. That’s where the stock closed before the disastrous first-quarter results sent the stock tumbling in April. As a result, the stock has now filled that gap, and usually when a gap is filled, the stock resumes its previous trend. In this case, the previous trend for Amazon had been lower. The stock’s RSI has also reached overbought levels, rising above 70.

Continued resistance around $145 could cause Amazon to give back much of the post-earnings gains and move to around $125. If the stock could rise further and break above $145, then it could rise to $160.

However, given the overbought levels and gap completion, it seems more likely that the stock could reverse to the downside. 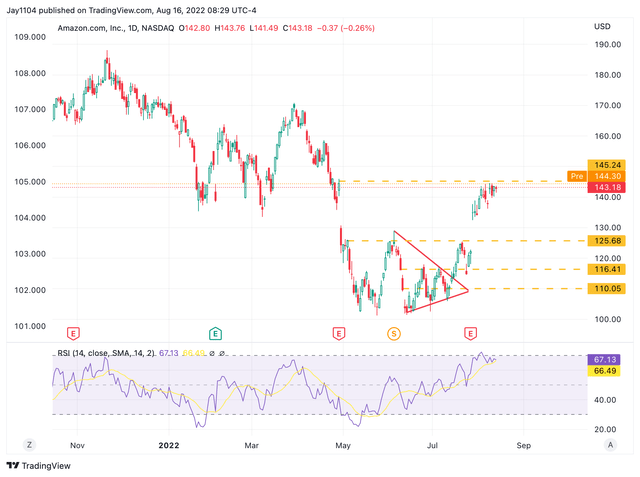 Amazon’s business may have turned the corner and cash flow from operations will begin to increase, but that hasn’t happened so far. Also, even if operating cash flow changes, the question will be how long it will take for them to recover; because the value of the stock on a cash flow basis is extremely high, suggesting that there needs to be some pullback in the stock price.

Reading the markets helps readers cut through all the noise by providing stock ideas and market updates and spotting opportunities.

We use a repeated and detailed process to observe fundamental trends, technical charts and options trading data. The process helps isolate and determine where a stock, sector or market may be headed over various time periods.