Home Stock Market Updates 1982 clues have a strategist saying the bear market is over: Morning Brief

When the closing bell rang last Friday, the S&P 500 posted its best monthly gain since November 2020.

The apparent enthusiasm of investors in July can be puzzling given the economic and earnings context facing the markets.

But for Tom Lee, co-founder and head of research at Fundstrat, the recent market rally makes perfect sense. What’s more, Lee argues, history suggests we may be at the start of a more forceful push through late 2022.

“The most important thing for me in this week’s events?” Lee asked in a note published on Friday: “Compelling and possibly decisive evidence that the ‘bottom is in’: the 2022 bear market is over.”

Last week, the Fed raised interest rates by 0.75%. GDP data that showed a second consecutive quarter of negative GDP growth. Recent housing data showed a notable slowdown in the most important sector of the economy. And looking abroad, Russia was seen further cutting the flow of gas to Germany as Europe prepares for a potentially cold winter amid Russia’s war in Ukraine.

And yet the markets rose.

This week started with the FactSet data out on Monday showing analysts making larger than normal cuts to third quarter estimates. In other words, analysts are more bearish than normal on corporate earnings. And this aggregate downgrade in earnings expectations comes amid high-profile declines in Meta Platforms ( META ) and Intel ( INTC ) over the past week.

Fundstrat’s optimism, however, extends beyond a view that hinges on how badly the news flow for investors has ended. In recent weeks, Fundstrat has been arguing that the market setup is similar to what investors were presented with in August 1982, a time that preceded a strong recovery in equity markets amid a turnaround in Fed.

In the summer of 1982, the US economy was in crisis and Fed Chairman Paul Volcker had not yet indicated whether the Fed would relax its campaign to curb inflation.

Federal Reserve Board Chairman Paul Volcker stands with his hands on his hips and smokes a cigar during a meeting in Washington, 1982. (Getty Images)

In October of that year, Volcker told the Fed could moderate efforts to curb inflation. “There are forces pushing the economy toward recovery,” the New York Times said Volcker in a speech. “I think the goal of politics should be to maintain that recovery.”

For investors, “sustaining this recovery” kicked off a nearly 20-year bull market in stocks. Two months before the pivot, markets sniffed out the Fed’s plans and in just four months erased all losses in a 22-month bear market that saw the S&P 500 tumble 27%.

And that 40-year rally is why, according to Lee, the S&P 500 could return above 4,800 and hit new record highs later this year. Last week, Lee notes that the bond market erased more than 0.5% of expected Fed interest rate hikes through next spring.

“The bond market made a serious ‘dovish pivot’ on Fed funds pricing in 2023,” Lee said. “Is it any wonder that equity markets found a foothold in July?” 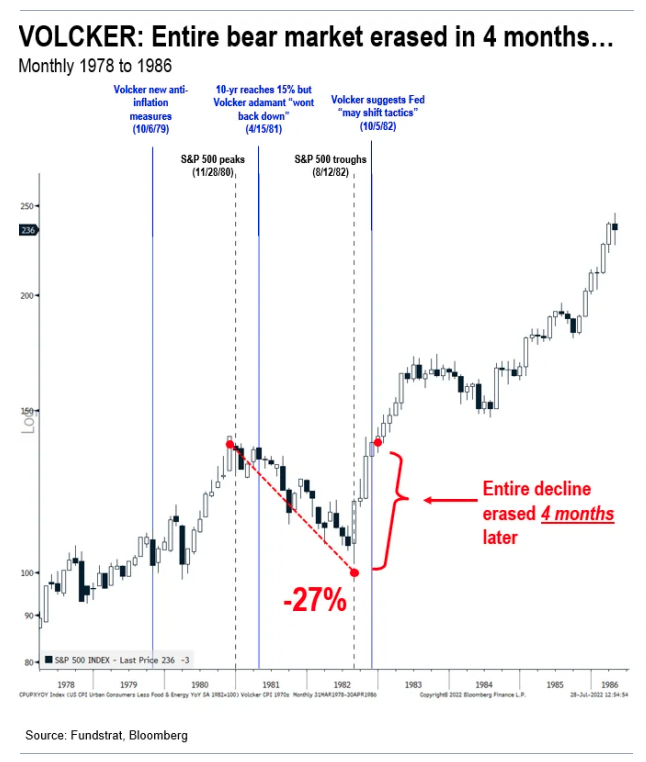 Furthermore, Lee sees the market pricing in a growth scare rather than a full-blown recession.

As was widely discussed this spring, the S&P 500 falls 32%, on average, during a typical U.S. recession. From peak to trough, the S&P 500’s decline during the current slide from all-time highs was 23%. And if recession is avoided, the 30% or more drop that many investors have been bracing for may never materialize.

Last week’s GDP data ignited a lively conversation about whether the US economy was already in or about to fall into recession. At least two negative quarters of GDP growth meet the criteria for a “technical” recession. Although, as we highlighted on Friday, Bank of America economists explained why a formal recession call isn’t likely anytime soon.

Manufacturing data released on Monday also added evidence to the case for slowing growth, but not necessarily an outright recession.

US manufacturing growth fell to a two-year low in July, according to the Institute for Supply Management’s latest Purchasing Managers’ Index (PMI). The PMI showed the largest one-month drop in the pace of price increases, but still came in at 52.8, with any reading above 50 showing an expansion in the sector.

Data from S&P Global survey likewise showed a slowdown in manufacturing growth amid a notable easing of inflationary pressures, but it is a trade-off the Federal Reserve made clear last week it is willing to make.

“Supply chain issues remain a significant concern, but have eased, removing some pressure on prices for a variety of inputs,” wrote Chris Williamson, chief economist at S&P Global Market Intelligence . “This has come down to the smallest rise in the price of goods leaving the factory gate seen in nearly a year and a half, with the inflation rate cooling sharply to add to the signs that inflation has peaked.”

What to see today